Liverpool twice blew the lead as a thrilling 3-3 draw at Brentford on Saturday saw Jurgen Klopp’s men edge just one point clear at the top of the Premier League.

Defeats for Chelsea and Manchester United earlier in the day propelled Liverpool to the top of the table and gave the Reds a golden chance to open up a three-point lead.

However, Brentford showed why they have made such a bright start to their first top-flight season for 74 years in a six-goal thriller that swung from end to end throughout.

Ethan Pinnock opened the scoring for the home side before Diogo Jota quickly equalised.

Mohamed Salah and Curtis Jones then twice put Liverpool in front, only for the visitors to be pegged back by Vitaly Janelt and Yoane Wissa.

A point was the least that Brentford deserved as the Bees caused the league leaders more defensive troubles than they have faced all season since Virgil van Dijk returned from injury.

Thomas Frank’s men sit ninth having have lost only one of their opening six league games.

The visitors had the first big chance when Kristoffer Ajer made a brilliant goal line clearance to hook Salah’s effort to safety.

But Brentford’s battering rams up front Ivan Toney and Bryan Mbeumo were soon causing Van Dijk and Joel Matip all sorts of problems.

Toney headed just wide and Frank Onyeka blazed a good chance over before Matip also had to clear off the line from Mbeumo.

The Bees pressure finally paid off when a cleverly worked free-kick saw the ball flash across the face of the Liverpool goal and Pinnock outmuscled Fabinho to bundle home at the back post.

Liverpool trailed for only four minutes and levelled in style as Jordan Henderson’s cross picked out Jota to power a header into the bottom corner.

The Portuguese would have had a second shortly afterwards but for an incredible reaction save from David Raya after Jones’ initial effort came back off the post.

A pulsating game continued to rage from end to end after the break.

Salah slotted home his 100th Premier League goal in 151 appearances for Liverpool from Fabinho’s exquisite chip over the Brentford defence.

The offside flag went up against the Egyptian, but a VAR review proved Salah was onside.

This time Brentford bounced back quickly as Pontus Jansson’s shot came back off the bar and at the second attempt Janelt nodded the ball over the line despite the best attempts of Trent Alexander-Arnold to clear.

Only injuries to Harvey Elliott and Thiago Alcantara opened the door for Jones to be handed his first Premier League start of the season.

The 20-year-old grabbed the chance to impress as his fierce strike flicked off Ajer to leave Raya helpless.

Brentford refused to be beaten, though, and got the point their performance deserved eight minutes from time.

Moments later Toney had the ball in the net, but the delirious celebrations at the Brentford Community Stadium were cut short by the offside flag.

And they could even have lost it in stoppage time as Raya spread himself to save from Roberto Firmino in a breathless finish. 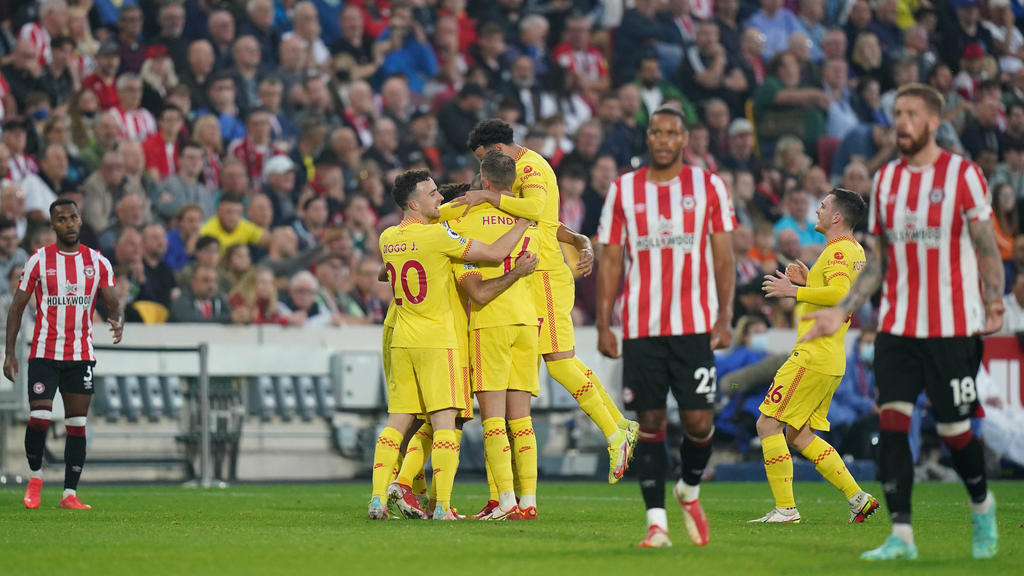 Liverpool will not panic buy